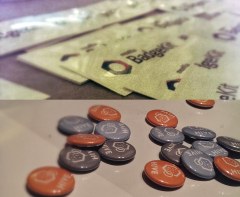 Amongst the cheerful clamor of hundreds of educators connecting at the Digital Media & Learning this year, I’ve heard some pretty amazing thoughts from some pretty amazing people on how to reform education. And although I’ve talked to participants and exhibitors from vastly diverse backgrounds, many of their approaches and plans seem to lay anchor in one idea.

I learned that the way we approach teaching in our current schooling system is sort of akin to shouting out an answer and hoping that people hear us. At DML, especially after talking to the exhibitors at Friday’s Science Fair, I learned that it’s not actually about how loudly we can shout our answers, but rather, how we can begin to ask questions.

The MIT Media Lab shows off their Storyscape transmedia project.

With the set model of the instructor standing in front of a classroom of students, we tend to think of education as a sort of broadcast of knowledge for consumption, instead of a dialogue to figure out what we want to learn and why it’s relevant to each individual learner.

We decided to name the Science Fair ‘Build Bridges’ because learning isn’t about broadcasting a message and hoping that people will hear you. It’s about building that bridge to a learner’s dreams, their interests, their living rooms and laptops and libraries.

On Friday, I was lucky enough to see all of the amazing projects at the Science Fair, and each one was doing just that.

Global Kids, a member of Hive NYC, showed me their project NYC Haunts, which is a game that students design and play using mobile and geolocation technology to learn about create interactive narratives around local history.

At the Arts Greenhouse table, I laid down my own backing beat for a rap song and learned how the program, based at Carnegie Mellon University, arms teens with digital skills using music-based technology and through the lens of their interest in hip hop.

From there, I moved on to check out STEM Stars, an after-school program for disadvantaged middle-school girls that provides them with pathways to learning about STEM careers and helps them take action to combat societal barriers that limit their entry into those fields.

A project made by the young women of STEM Stars.

I learned about a computer game called Codemancer, where the character has to learn magic in order to save her father from his captors. The magic learned along the way, of course, is actually basic coding and programming.

I ventured over to the National Veterans Art Museum table (a part of Hive Chicago), where I learned about how they’re working on a project that connects the art of American war veterans to youth who learn digital journalism skills interviewing them about their experiences.

I talked to Paul Boone from Sarah Heinz House, an after-school club on Pittsburgh’s north side, who told me about their media lab for civic engagement. They ask students about problems they have or changes they’d like to make in the world. The students then produce stories, and work with other students to take original photographs and create a PSA video to talk about how they can help. For them, Paul said, it’s about getting comfortable with the idea of expressing their feelings and talking about something they wouldn’t normally bring up, like teen cutting or suicide. It’s about taking things that are important in those students’ everyday lives and using digital storytelling skills to bring those problems to light and propose solutions.

In each of the exhibits above as well as all of the others, I found a thread of commonality– it was all about asking questions instead of providing answers, about starting with the individual learner and saying, “What do you want to do?”

And that, I realized, is where Mozilla comes in. We build things to empower *people*, not messages. We created BadgeKit to allow organizations like Sarah Heinz House recognize their students for the incredible work they do outside of their seat time at a school. We run Hive to help organizations get better at connecting, at building bridges to allow them to meet that one individual at the starting point. We created Webmaker tools to allow anyone to dive in and remix content that matters to them, to shape the message they want to hear instead of simply consuming it.

I was talking to Nate Hill, a rockstar librarian and Science Fair exhibitor on behalf of the Chattanooga Public Library’s 4th Floor, who said, “Someday, we’re gonna get into trouble…but that’s the only way to live.” And he’s right. Projects like everything I got to see at the Science Fair on Friday were all about questioning, exploring and experimenting, about starting a conversation instead of telling someone what they should and shouldn’t know or want.

It’s about starting with the individual, not the message, and connecting to them in a meaningful way.

Oh and also, I got to play the drums using vegetables. So that was cool too. 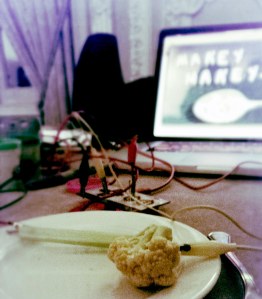 An immeasurably huge thank you to everyone who came to and participated in the Science Fair this year– it was truly an inspiration to see so many incredible projects. For a full list of exhibitors and their projects at Build Bridges: A Science Fair for Open Learning, check out the DML 2014 website.